This is a good summary of common mistakes with many investors make. Thanks to Shane Oliver at AMP Capital for this article.

In the upside-down world logic that applies to much of investing, there are a bunch of mistakes investors often make which makes it harder for them to reach their financial goals. This note looks at the nine most common mistakes investors make.

“Bull markets are born on pessimism, grow on scepticism, mature on optimism, and die of euphoria” – John Templeton.

Individuals often feel safest when investing in an asset when their neighbours and friends are doing the same and media commentary is reinforcing the message that it’s the right thing to do. Call it “safety in numbers”. But it’s invariably doomed to failure. It stands to reason that when everyone is bullish and has bought into an asset with general euphoria about it, there is no one left to buy in the face of more positive supporting news but lots of people who can sell if the news turns sour. Of course the opposite applies when everyone is pessimistic and bearish and has sold – it only takes a bit of good news to turn the value of the asset back up. So it turns out that the point of maximum opportunity is when the crowd is pessimistic and the point of maximum risk is when the crowd is euphoric, but unfortunately most don’t realise this because it involves going against the crowd and that’s uncomfortable.

Mistake #2 Current returns are a guide to the future

“Markets are in a constant state of uncertainty and flux and money is to be made by discounting the obvious and betting on the unexpected” – George Soros.

Because of difficulties in processing information investors adopt simplifying assumptions, or heuristics. One of these is that recent returns or the current state of the economy and investment markets are a guide to the future: so tough economic conditions and recent poor returns are expected to continue and vice versa for good returns and good economic conditions. The problem with this is that when its combined with the “safety in numbers” mistake it results in investors getting in at the wrong time (eg, after an asset has already had strong gains) or getting out at the wrong time (eg, when it is bottoming). In other words, buying when asset values are high and selling when they are low.

This is generally true over the long term and at various points in the economic cycle, but at cyclical extremes it is invariably wrong. The problem is that share markets are forward looking, so when economic data is really strong – measured by strong economic growth, low unemployment, etc – the market has already factored it in. In fact the share market may then fret about rising costs, rising inflation and rising short term interest rates, and hence things are so good they start to become bad! For example, when global share markets peaked in 2007 prior to the GFC economic growth and profit indicators looked good.

Of course the opposite occurs at market lows. For example, at the bottom of the global financial crisis bear market in March 2009 after 50% plus fall in shares, economic indicators were very poor – unemployment was up, profits were falling and all the talk was about the worst global recession since the Great Depression. And yet share markets started to rebound. History indicates that the best gains in stocks are usually made when the economic news is still poor, as stocks rebound from being undervalued and unloved. In other words, things are so bad they are actually good for investors.

Mistake #4 Experts can tell you where the market is going

I must admit this one is kind of sensitive! But I have to be real. No one has a perfect crystal ball. It’s well-known that when the consensus of experts’ forecasts are compared to actual outcomes they are often out by a wide margin. Forecasts of investment and economic indicators are useful but they need to be treated with care. Usually the grander the forecast – calls for “new eras of permanent prosperity” or for “great crashes ahead” – the greater the need for scepticism as such calls are invariably wrong, either they get the timing wrong or its dead wrong.

Market prognosticators suffer from the same psychological biases as everyone else. Precise point forecast for say where the share market will be at the end of the year are conditional upon information available when the forecast is made. But they need to be adjusted as new facts come to light. If forecasting investment markets was so easy then the forecasters would be rich and so would have stopped doing it. The key value of investment experts – or at least the good ones – is to give an understanding of the issues surrounding an investment market and to put things in context. The latter can provide valuable information in terms understanding the potential for the market going forward. This is far more useful than a simple point forecast as to where the ASX 200 will be in a year’s time.

Mistake #5 Letting a strongly held view get in the way

Many let their blind faith in a strongly held view – “there is too much debt”, “aging populations will destroy share returns”, “global oil production will soon peak”, “the Eurozone will break up”, “an Australian house price crash is imminent”, etc – drive their investment decisions. They could turn out to be right but end up losing a lot of money in the interim. In fact there is a big difference between being right and making money.

Mistake #6 Looking at your investments too much

This sounds perverse – surely checking up on how your investments are doing is a good thing? But the danger is that the more investors are exposed to news around their investments the more they may see them going up and down – on a day to day basis it’s close to 50/50 as to whether the share market will be up or down. This “noise” can cause investors to freeze up or worse still it feeds on our natural aversion to any reduction in the value of our investments and thus encourages a greater exposure to lower returning safer investments. As a 1997 study by US behavioural economist Richard Thaler found, investors “with the most data [about how their investment is performing] did the worst in terms of money earned”. The trick is to have patience (evidence shows that patient people make better investors because they can look beyond short term noise or are less inclined to jump from investment to investment after they have already run) and turn down the noise.

“There seems to be a perverse human characteristic that makes easy things difficult” – Warren Buffett.

Given the increasing ease of access to investment options, various ways to assemble them and information and processes to assess and evaluate them investment complexity can become the norm. The trouble is that when you overcomplicate your investments it can mean that you can’t see the wood for the trees. That you spend so much time focussing on this stock versus that stock or this fund manager versus that fund manager that you ignore the key driver of your portfolio’s risk and return which is how much you have in shares, bonds, real assets, cash, onshore versus offshore, etc. Or that you end up in investments you don’t even understand. So avoid clutter around your investments, don’t fret the small stuff, keep it simple and don’t invest in products you don’t understand.

Mistake #8 Too conservative early in life

“How many millionaires do you know who have become wealthy by investing in saving accounts?” – Robert G. Allen.

Cash and bank deposits are low risk and fine for near term spending requirements and emergency funds but they won’t build wealth over long periods of time. The chart below is one of my favourites and shows the value of $1 invested in various Australian assets since 1900 allowing for the reinvestment of interest and dividends along the way. That $1 would have grown to $442,373 if invested in shares but only to $228 if invested in cash. Despite periodic setbacks (WW1, the Great Depression, WW2, stagflation in the 1970s, 1987 share crash, GFC, etc), shares and other growth assets provide much higher returns over the long term than cash and bonds. 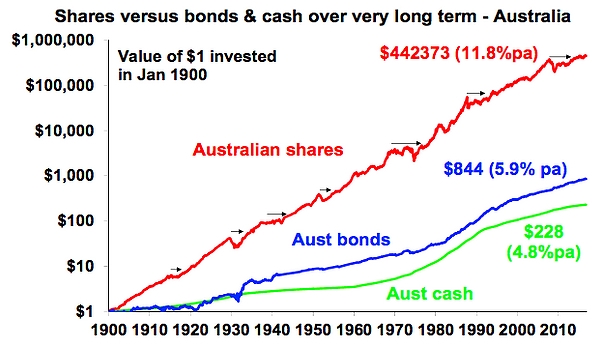 Not having enough in growth assets can be a particular problem for investors early in their working career as it can make it much harder to adequately fund retirement later in life. Studies in the US have found that millennials (those born between 1980 and 2000) tend to hold more in cash and less in shares than older generations at a time when they should be starting to grow their wealth. Perhaps the tech wreck and the GFC have made them more wary. Fortunately compulsory superannuation in Australia and My Super funds that allocate a higher allocation to growth assets for younger members help manage this.

Mistake #9 Trying to time the market

Without a tried and tested asset allocation process, trying to time the market, ie selling before falls and buying ahead of gains is very difficult. Many of the mistakes already referred to above kick in and it can turn out to be a sure way to destroy wealth. Perhaps the best example of this is the comparison of returns if the investor is fully invested in shares versus missing out on the best days. Of course if you can avoid the worst days during a given period you will boost returns but this is very hard to do and many investors only get out after the bad returns have occurred, just in time to miss out on some of the best days and so hurt returns. The next chart shows that if you were fully invested in Australian shares from January 1995 you would have returned 10.4% per annum (including dividends but not allowing for franking credits). But if by trying to time the market you miss the 10 best days the return falls to 7.9% pa. If you miss the 40 best days it drops to just 3.4% pa. Hence the old cliché that its time in that matters not timing. 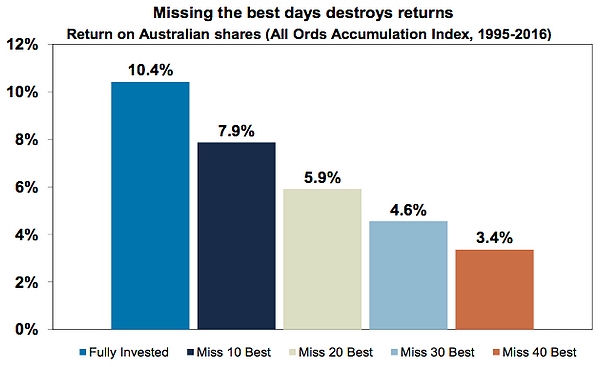 One way to overcome many of these mistakes is to have a long term investment plan that allows for your goals and risk tolerance and then sticking to it.