Giving the gift of compound interest 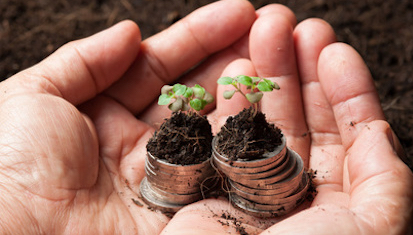 The first lesson most children learn about money is what they can spend it on – games, the latest toy, their own iPad – but it’s a parent’s obligation to also teach them about managing their money. And the earlier we can teach them about the power of compounding, the more they will appreciate us.

The magic of compounding

Compounding can be the road to riches and anyone can do it. All you need is perseverance to stay on the savings path and the intelligence to understand what is happening. Compounding is earning interest on your interest. The more money you accumulate the larger the return each year.

There are two catches. First, it involves sacrifice. You can’t spend it and still save it. And second, it sounds boring. At least it is until the balance starts growing and then it becomes downright fascinating!

Let’s look at an example.

Brent’s twin sister Charlotte was having too much fun at 17 spending every dollar she earned so she delayed her savings program until she reached age 30 – just when Brent stopped. Starting with $100 Charlotte deposited $1,500 per year and maintained that amount every year until she reached age 65. Her fund also averaged 7% p.a. and Charlotte ended up with $208,423. Amazingly through the power of compounding, Brent, who hadn’t added anything to his fund for the last 35 years has $325,123 in his account – over $116,000 more! The 13 years that Brent saved were worth more than all of the 35 years that Charlotte saved.

You’re probably asking, “Where would someone under 20 find $1,500?” We have a suggestion. If your adult child is working – even for a small wage – they will probably qualify for the federal government’s co-contribution scheme. As well as teaching your children about compounding, you could gift them a $1,000 superannuation contribution and the government would add up to another $500 to their fund account.

This suggestion applies to superannuation which they won’t be able to access until later in life. However, the principle is the same if the money is invested outside super where they can use it to buy or invest in something much earlier.

There are some aggressive investment strategies available for young people who are not as risk-conscious.