More on the New Centrelink Rules as at 1 January 2017

From 1 January 2017 the Centrelink assets test parameters will be rebalanced by increasing the assets test free areas and the taper rate, the rate by which a pension is reduced once the free areas are exceeded. There is no change to the Income Test parameters, remembering that the aged pension payment is calculated against both the Assets and Income Tests with the actual pension paid being the lower rate of the two tests.

People whose pension reduces to nil on 1 January 2017 as a result of these changes will automatically be issued with a Commonwealth Seniors Health Card, or a Health Care Card for those under pension age, without the need to meet the usual income requirements. Veterans whose service pension is cancelled under this measure will retain their Veterans’ Affairs Gold Card.

In terms of the actual numbers, a summary of the new thresholds are:

For every additional $1,000 in assets above the lower threshold, payments will reduce by $3 per fortnight (currently $1.50/$1,000 over lower threshold):

The new tests have two arms

The new tests operate on two levels. Firstly, the actual dollar value threshold has been altered as shown above. The lower threshold has actually been increased thereby allowing access to income support payments to a greater number of people at the lower end of the wealth spectrum and potentially a higher level of pension. The upper threshold has been reduced significantly thereby reducing or excluding from Centrelink benefits those the Government has determined have adequate assets to fend for themselves. While intrinsically this may “make sense”, setting the boundary of where assets are adequate (or not) is always going to be open to criticism.

The second arm of the test is a doubling of the taper rate from $1.50 to $3.00 per fortnight for each $1,000 of assessable assets in excess of the new thresholds thereby increasing the rate at which income support payments diminish. As this reduces pension payments, it will force clients to draw more against their own capital in order to maintain the existing standard of living, and will cause them to deplete their personal savings and capital more quickly.

There has been no change to which assets are caught by the test – the old rules still apply. The family home is still exempt from the asset test. Assets that are caught include:

This list is not exhaustive, but the most important point is that there has not been a change to the existing assets that are assessable under the tests.

Who is caught by the changes?

An assets test applies to social security pensions – age pension, disability support pension, wife pension, carer payment, bereavement allowance, widow B pension and certain pensions administered by the Department of Veterans’ Affairs. Once the lower thresholds outlined above are exceeded, the benefit is reduced by $3.00/$1,000 until it cuts out completely at the upper threshold.

An assets test also applies to parenting payment and allowances (widow allowance, youth allowance, austudy payment, newstart allowance, sickness allowance, special benefit and partner allowance – known as ‘social security benefits’. For these payments, if the value of a person’s assets exceeds the lower threshold, then the payment is not payable – the so called “sudden death” test – as there is no assets taper rate for these payments.

While these changes will impact on many, not everyone will be adversely affected. In fact, those with lower levels of assessable assets may be eligible for an increased Centrelink entitlement. For example, assuming the income test does not apply, a homeowner couple with assets below $296,500 are not affected. For those with assets of between $296,500 and $456,000, a higher level aged pension will actually be payable under the new thresholds. From $456,000 of assets and above, the increased taper rate (of $3.00/$1,000 of assets) acts to reduce the aged pension below the existing levels until it cuts out entirely at $816,000 of assets. The following graph illustrates the likely situation under the new rules: 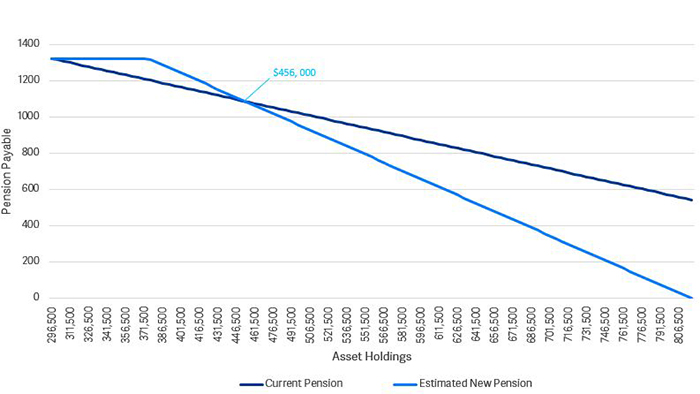 It should be remembered that the changes affect only the asset test thresholds, not the income test thresholds. Given that Centrelink tests under both the assets and income thresholds, applying that which gives the lowest income support payment, and, that the new rules penalise only assets, it is likely that there could be a new hierarchy of preferred investment options. From preferred to least preferred, the list could look like this:

Such a bias against holding assets that preferentially penalise Centrelink payments could also rekindle an interest in strategies to reduce assets including:

Another implication to consider is that with life expectancies generally increasing – we are living longer – and these new rules reducing income support for many, if you wish to maintain a similar standard of living, there will possibly be accelerated use of your capital. If you wish to maintain your standard of living, funding will come either from: